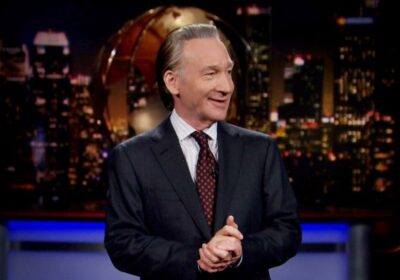 Bill Maher used a pointer to illustrate his lecture Friday night on HBO’s Real Time, as he gave a “Zapruder-ized” analysis of the Oscars moment that everyone can’t let go.

Maher called the segment, “Explaining jokes to idiots,” and said he would break down jokes for the humor-impaired (a Will Smith shot accompanying).

“Comedians have been under attack for some time,” Maher said. “So I must defend my tribe. This war on jokes must end.” He contended that the infamous “G.I. Jane” quip from Chris Rock “wasn’t an alopecia joke, any more than the chicken crossing the road is about bird flu.”

Maher pointed out an earlier joke on Oscars night where Timothée Chalamet was teased for looking a little run down, with the cameras cutting to J.K. Simmons in the Oscar audience. “That’s where it ended,” Maher said. “It’s called being a good sport. Let hte common people take the piss out of you for one minute.”

He then pointed out in slow motion the infamous “G.I. Jane” joke moment, showing Will Smith laughing. Maher likened it to the perfect illustration of cancel culture. “He hasn’t found out yet that his original general reaction was wrong, and that he should conform ot a different view,” Maher said, as the camera slowly panned to Jada Pinkett Smith and her “We are not amused” glare. .

Maher noted that woke hecklers and the general intolerance of Gen Z is killing comedy. He pointed out how Kevin Hart was booted from the Oscars for a joke, and reminded us that Gilbert Gottfried and Kathy Griffin “were tasteless” in their moments. “So what? That’s why we like them!” From Dave Chappelle through Sarah Silverman and Roseanne, all comedians are a little crazy, Maher said. “And you need crazy on that wall.”

College Gen Z’ers are particularly humorless, he claimed. Where students used to go to college to lose their virginity, “now they go to lose their sense of humor,” Maher said. “Soon there will be nothing to joke about but airline food and Starbucks getting your name wrong.”

Thank God George Carlin isn’t around to see this, Maher mused. He invoked how Carlin turned his back on a traditional comedy club career to get in front of college audiences. “I got to be with people who will let me be myself and experiement,” Maher said of a Carlin quote. He shook his head and added that the seven words you can’t say now appear to be “Jada, can’t wait for G.I. Jane 2.”

Earlier in the show, playwright/director/writer David Mamet came on to plug his new book, Recessional: The Death of Free Speech and the Cost of a Free Lunch.”

“We have to have free speech,” Mamet said. “Without it, we have nothing, and it doesn’t matter which group it is.” He added, “When it is not acceptable to have an opposing view, we’ll end up with a totalitarian state.”

Is it possible that society is so far gone that we’ll get to that point?  “A lot of people thought Red Skelton was funny,” Mamet said to illustrate.

Maher also had Nancy MacLean, historian at Duke University and author of the Democracy in Chains: The Deep History of the Radical Right’s Stealth Plan for America; and David Leonhardt, Pulitzer Prize-winning columnist and author of the New York Times daily newsletter. They discussed the current fixation with pedophilia, the Don’t Say Gay Bill, and the Ukraine war.