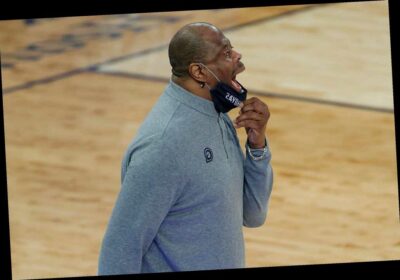 The Knicks are finally a team to be proud of

Sam Darnold twisting in the wind after Jets' about-face

It will never again sound as loud to Patrick Ewing as Game 7 of the Eastern Conference Finals against the Pacers, after his put-back dunk of a John Starks miss with 26.9 seconds left sent the Knicks to the 1994 NBA Finals against the Rockets, and he stood on a press table and bathed in the unbridled love from the Garden crowd following his 24-point, 22-rebound heroics.

“It was a long time coming,” Ewing said afterward.

All these years later, all those years spent wondering why no NBA team would hire him as head coach, Patrick Ewing reminds us — and hopefully some overzealous members of Garden security — that the Garden is still his house.

There he was, triumphantly waving his arms high over his head after he had shattered Seton Hall’s March Madness dream, taking his Georgetown team — his fourth since he was hired in 2017 — to the Big East Tournament Final for the first time since 2010, with a 66-58 victory.

Georgetown is the first Big East team in the history of the conference to be selected LAST in the preseason poll to be heading to the championship game.

They aren’t Hoya Destroyas just yet. But it’s only a matter of time now.

He was certain his beloved coach, Big John Thompson, who passed away in August, and longtime men’s basketball academic coordinator Mary Fenlon were smiling down on him on Friday night, and undoubtedly will be again on Saturday night when he tries to get Georgetown back to the Dance with a victory over Creighton.

“Both [Thompson] and Mary Fenlon are smiling down on us right now,” Ewing said. “They’re very happy, they’re probably even dancing a jig like he always says.”

Ewing’s team endured a coronavirus outbreak, and he himself weathered a hospitalized bout with the virus, and here they are, still standing, and standing tall and proud.

“We’ve come a long way,” Ewing said. “It’s been a tough year for everyone all over the world with the pandemic. We lost Coach Thompson, and also Coach [John] Chaney, pioneers of this profession, giving people like myself opportunities, and a lot of people all over the country opportunities to go to college.”

Ewing played with a chip on his shoulder, if only because there was no other way to play against Michael Jordan’s Bulls, and you know it means plenty to him that these Hoyas are a laser-focused, fist-balled reflection of him. Hoya Paranoia can still be a powerful motivating force.

“The fact that people discounted us … even last night I’m watching TV, they’re saying Seton Hall is just gonna wipe us, push us to the floor, and get to the next game,” Ewing said, “and we showed that we have courage, we have fight, we have the Georgetown fight — Hoya Saxa — that means something.”

It means “what rocks,” and it is Georgetown basketball that rocks again. The Hoyas are 12-12, so they will need to win their first Big East Tournament Championship since 2007 to punch their ticket to the Dance. Ewing? He won three of them as a player.

Their mettle was tested down the stretch but the Hoyas refused to surrender even after this third game in three days.

They absolutely suffocated co-Big East Player of the Year Sandro Mamukelashvili (3-16, eight points) and would have cruised if a fearless Jared Rhoden (22 points) hadn’t picked up the slack.

“I just wanted to make everything tough for him,” the Hoyas’ Jamorko Pickett said.

Seton Hall coach Kevin Willard seemed to agree that everything was tough for his senior star.

“If you’re driving and you’re not getting foul calls, teams are gonna be a little bit more physical with you,” Willard said, “that probably doesn’t help.”

The game was there for the taking, and the tenacious Hoyas took it. Chudier Bile converted a three-point play with 1:36 before Bile and Qudus Wahab rejected a drive by Shavar Reynolds and then Dante Harris sank three free throws.

“Since Patrick Ewing was playing, Georgetown has always been known for the team that’s just gonna whatever it takes to win,” Pickett said.

Except the winning has taken a long holiday.

“When you talk about the Big East, people think about Georgetown,” Ewing said at his introductory press conference in 2017. “Even though we’re not at a full strength right now, but we’re still Georgetown.”

And he’s still Patrick Ewing, Greatest Knick Of Them All, unbeknownst to whomever inexcusably and inexplicably treated Ewing as if he had never worn the uniform and promoted him to chat later Thursday with James Dolan.

“That’s private. That’s between me and Mr. Dolan. We talked about the incident and it’s over with,” Ewing said.

When Ewing was reminded during the postgame television interview that Georgetown was one win away from an automatic NCAA Tournament bid, with a huge smile he rocked back and let out: