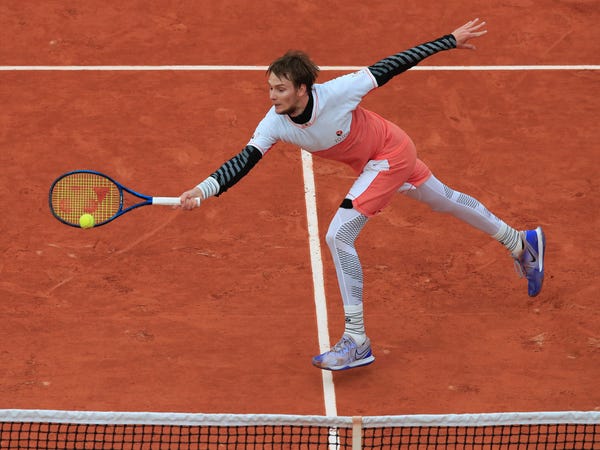 As professional tennis stars' serves have gotten stronger, faster, and harder to return in recent years, players on the receiving end have had little choice but to step back beyond the baseline in order to react in time.

But that added space between the net and the returner – leaving a glaring opening for crafty servers to exploit. At the 2020 French Open, players have begun to do just that.

This year's Grand Slam tournament at Roland-Garros has seen the resurgence of the "spoon serve," an underhanded service meant to catch their opponent by surprise and force the returner to charge the net in an attempt to get their racquet on the ball.

To some in the tennis world, the move is seen as a creative response to the brute force some players bring to the court; to others — especially those concerned with maintaining the "integrity" of the sport — it's perceived as a slight. It follows, then, that the man responsible for the spoon serve's comeback doesn't much care for the game of tennis.

"I hate tennis with all my heart. I hate every day that I have to play," world No. 49 Alexander Bublik told French publication FrenchActu back in February. "To be honest, I don't see a bright spot in being a tennis player. I only play for the money. If there was no money at stake, I would quit right away."

But there is money at stake, and Bublik is focused on obtaining it through the most efficient means possible. If that means catching his opponent off guard with a quick blip of a serve, so be it.

He pulled one off to clinch the first game of the fourth set in his 6-4, 7-5, 3-6, 6-3 upset over world No. 8 Gael Monfils during the opening round of the French Open this year.

Bublik started something of a trend from there. The following day, Romanian Monica Niculescu tried to execute a spoon serve against American Danielle Collins — to no avail.

Sara Errani managed to get one past world No. 5 Kiki Bertens on match point during their second-round matchup, but earlier on, the Italian struggled to get similar shots over the net.

And a few courts away that same day, American Mackenzie McDonald tried his luck with an underarm serve again unofficial King of the Clay Rafael Nadal. Unsurprisingly, the 12-time French Open champion made light work of the 25-year-old's attempt, which cleared the net but landed too deep in the box to catch Nadal flat-footed.

Though it may be a trendy move at Roland-Garros this year, few competing on the circuit employ it as consistently and effectively as Bublik. He told Tennis.com that spoon serves are roughly 70% luck in his experience and that he picks his spots, preferring the ad side to the deuce side.

"A good underarm serve is very tough," he said. "I really practice."

His signature skill couldn't save him in the next round of the French Open, where he lost in straight sets to Italian Lorenzo Sonego. Still, the movement of sorts that he spurred got plenty of the sport's heavy-hitters talking, including Nadal and world No. 1 Novak Djokovic.

"If he's winning, is a good tactic," Nadal said after beating McDonald in the second round. "If he's losing, is a bad tactic. That's all."

"For example today for Mackenzie was not a good tactic. For Bublik, if that works, is a good tactic. It is part of the game. I don't see disrespectful or not," he added. "If you do it with the goal to improve your game, or like a tactical thing, I support 100 percent. If you do for disrespect the opponent, is not a good thing."

Djokovic, for his part, said he "saw what Nadal said about it" and agreed with him "100%."