Shooting pains: for this Olympian, sport relieves the pressure 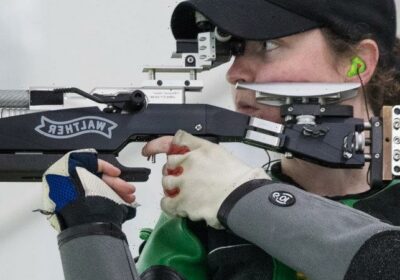 Elise Collier’s headache never goes away, but for the several seconds it takes to line up her rifle, still herself and fire it at a target the size of a pinhole 10 metres away, the pain recedes to the back of her mind.

Other times, Collier plays with her Lego or her Rubik’s cube, or rides her unicycle, or perhaps studies the odd socks she chooses to wear, or just fidgets. “I’ve just got to stay busy,” she says. “The second I stop and sit down, the first thing that comes to mind is, my head hurts. It spirals from there.” It’s been this way for nearly 10 years now. Her headache is not a metaphor. It’s a headache. 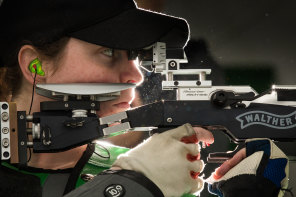 Later this month, Collier, 22, will have for a distraction the pursuit of a medal at the Tokyo Olympics. Her personal best in the 10-metre air rifle is greater than the world record, but because it was not set in international competition is recognised only as an Australian record. Let’s just say she’s on target.

There’s scarcely a sport Collier has not played. At the start of her teens, Collier was cricket mad, playing for five or six teams at once, including some that were otherwise boys only. “I woke up, I went to school, I played cricket, I went back to bed,” she says.

One night while doing a fielding drill at Ormond, a stray return hit Collier in the back of her head, fracturing her skull, although no-one realised it at the time. The next Sunday, playing her third game that weekend, she collapsed on the field.

Remarkably, she persevered. Two months later, she took the final wicket to win her otherwise-all-boys team a grand final. It was doubly sweet. Ormond had been wholly supportive, but some opposing teams would arrive at the ground, look down their noses and say: “Oh, there’s a girl playing.” 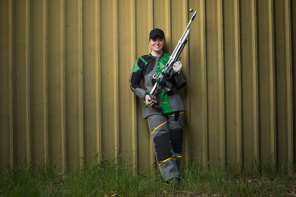 Collier is grateful that there is no ideal physique for shooting. “I could never play basketball because I’m 5′1″.”Credit:Jason South

It did their heads in to discover that she was a match for them. Hers was hurting anyway. “From the moment I got hit, I’ve had a headache ever since,” Collier says. “In the beginning, I couldn’t focus on anything but this headache.” She has described it as like having her head squeezed.

Only one sentence stuck. “Early on, the doctors said, we don’t know when or if this headache is going to go away. Prepare to have it for the rest of your life,” she says. “I’m very lucky I’ve found ways to handle it.”

It’s been anything but line of sight. About three years after the accident, Collier’s body started to shut down. “One of my arms was shaking. I couldn’t stop it,” she says. “One of my eyelids closed and I couldn’t open it unless I used my fingers to prise it open. I started going blind in that eye.

‘The doctors said, we don’t know when or if this headache is going to go away. Prepare to have it for the rest of your life.’

“I lost all sense of smell, sense of taste. I went deaf in one ear. I got really bad pins and needles in my legs, to the point where I couldn’t walk properly. I looked like a baby learning to walk. No-one knew what was going on.”

Collier says she felt worse for her family than herself. “I’ve always been the sort of person that if something bad’s going to happen, I want it to happen to me, because I know I can handle it,” she says. “The scariest part was seeing the faces of my family. They didn’t know what to do. Doctors couldn’t help them. They were lost. For the first time in my parents’ lives, they couldn’t protect me.”

Eventually, the ailments resolved themselves. No-one could say why, nor that they won’t return. “What I’ve found out is that they don’t really understand the brain,” Collier says.

Cricket had to go. Collier’s reactions had slowed, and she found herself getting hit at the crease more often. It was too much for her parents. “They said, ‘we love you, but we can’t support you playing cricket any more,’” Collier says. She was 16.

Her father, Peter, was a hobby shooter who had done some competition. He told his daughter that it had taught him how to deal with distraction and suggested she try it. In shooting at least, no-one would be aiming at her.

At a range in Springvale where she now works, her aptitude quickly emerged. Initially, it was in non-Olympic disciplines. Using study as a pretext, Collier watched the shooting at the 2016 Rio Olympics on a laptop in the school library, fascinated but mystified. Now she’s, well, a gun.

“When I’m shooting, I have the same mentality as when I’m meditating,” Collier says. “I’m solely focused on one thing. Everything else is out of my mind. But you don’t want to be hyper-focused the entire time because you’ll just tire yourself out.”

Hence her unique suite of diversions. The unicycle? “That was an impulse buy,” she says. “My mum sent my dad and I Christmas shopping without a list. So we bought a unicycle.” She says she thought it would be like riding a bike. It isn’t. It’s like riding half a bike. While we’re at it, the socks? “I hate looking down and seeing matching socks,” she says. “So I’ve always got odd socks on.”

Even on the range, Collier’s bespoke personality pokes through. “When I shoot, I chew gum,” she says. “No-one else does it. Everyone says it’s bad because you don’t want to be moving.

“I’ve been told that there’s a direct relationship between your balance and the position of your jaw. So chewing gum is not ideal. But it works for me. It helps me to focus. It probably annoys everyone because I chew with my mouth open, but it works.”

In 10-metre air rifle, the target ring is 0.5 millimetres. In last year’s Olympic selection event, Collier scored 253.6, bettering the world record of 252.9 without officially breaking it. She was in for Tokyo. That was in April. Then COVID jammed up everyone’s sights, isolating Collier from her Olympic teammates. Instead, because the targets are electronic, they can and do compete by Zoom.

A few weeks ago, as impending lockdown in Melbourne threatened to disrupt Olympic plans, officials hustled Collier and two other shooters off to digs in Shepparton, where they will stay until joining the Olympic squad in Brisbane next week. Altogether, including a stretch in quarantine when she returns from Tokyo, it means she will be away for eight weeks.

For a competition last weekend, Collier’s mixed pairs partner Dane Sampson and their opponents, brother and sister Jack and Tori Rossiter, were all in Adelaide. It meant that on the range in Shepparton, there were only Collier, her coach and a few birds. 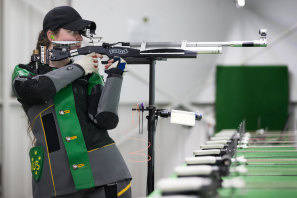 “It’s odd shooting in what looks to be a training session, but really is a competition,” she says. “But I approach competition and training the exact same way. The only thing is that at the end, I get to compare my scores with other people.” She and Sampson won.

There is a thread running through Collier’s rise. The infatuated junior cricketer who was set back by a freak accident and left with an apparently permanent handicap but now is about to become an Olympian knows it. “It’s the same as being a good athlete at any other sport,” she says. “You’ve got to be able to mentally handle whatever happens.

“Some sports require genetic predisposition. I could never play basketball because I’m 5′1”. Luckily, shooting is a sport where there’s no ideal physique. It comes down to how you handle it.

“Being able to stand still helps, but the main thing is how you deal with whatever comes mentally. That’s what determines whether you’re a club shooter, a state-level shooter or you end up making the Olympics.”