Home » Sport » Opinion: Annika Sorenstam and much of golf world refuse to break from Donald Trump

Opinion: Annika Sorenstam and much of golf world refuse to break from Donald Trump 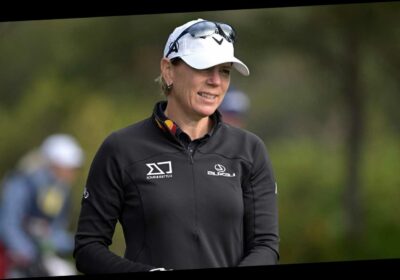 Annika Sorenstam, the Hall of Fame golfer who flew to Washington, D.C., to stand next to outgoing President Donald Trump less than 24 hours after he incited the deadly insurrection at the U.S. Capitol, was given a chance Tuesday to repudiate Trump, to apologize for her actions and to admit she made a mistake.

She did none of that. Failing miserably to comprehend the gravity of her association with one of the darkest days in American history, she instead fell back on embarrassing, insipid clichés.

“I’m not one to look back,” she told Golfweek.

“I’m not one to second guess,” she told Golf Channel.

Sorenstam is not one to say much of anything because she, like so many in the staid, elitist game of golf, has sold her soul for Donald Trump.

For every step golf takes to try to enter the 20th century before too much more of the 21st goes by, it takes a step backward and reminds us exactly what it is:

A Trump-loving, rich white man’s game, mostly; a sport almost completely out of touch with what’s happening in this diverse land outside the walls of its exclusive country clubs and the windows of its private jets.

At noon ET Wednesday, as Trump departs in disgrace, his presidency in shambles, the United States will be led by President Joe Biden and Vice President Kamala Harris. But there will be many in golf who will maintain an allegiance to Trump no matter what, including corporate leaders who run the game, and the men’s and women’s Tour players who have strongly and openly supported him.

It doesn’t have to be this way. Golf could change if it really wanted to. We’ve seen examples already. Little more than a week ago, the PGA of America moved at lightning speed (for golf) to strip Trump and his beloved Bedminster of the 2022 PGA Championship. A few days after that, Ralph Lauren dumped PGA Tour star Justin Thomas after he was caught using a homophobic slur at a tournament.

Was the real world finally closing in on golf? Was the game finally getting its head out of the sand trap?

Then came Tuesday, and Sorenstam’s pitiful performance with the golf media when asked about showing up to receive the Presidential Medal of Freedom from Trump on Jan. 7 with fellow golfer Gary Player. It should be noted that New England Patriots coach Bill Belichick, hardly one to bow to political pressure of any kind, canceled on Trump a few days later rather than be seen with him accepting the same award.

So here was Sorenstam’s chance to right a wrong, to correct the record, to make her break from Trump. She’s a trailblazing women’s sports icon, a description rarely attached to a Trump fan. This was her moment.

She blew it. Not once did she mention Trump by name. After retweeting Jack Nicklaus’ long endorsement of Trump before the election, does she still support him? We have no idea. Her husband, Mike McGee, a very public Trump supporter, has deleted his Twitter account. She has not said why. She has not posted any photos of the Medal of Freedom ceremony. Why not?

This matters because Sorenstam is much more than a 50-year-old retired LPGA legend. She is the new president of the International Golf Federation. She has made herself the preeminent golf role model for girls, with a brand known around the world. As she stood for her Golf Channel interview, she was a human salesperson, with logos for Lexus, Mastercard, Cutter & Buck and Callaway visible on her shirt and hat.

What have those corporations said about the appearance with Trump? Not a peep.

Silence has gripped all kinds of people who should have an opinion on a golf superstar's visit with the man who incited the deadly assault on our democracy. LPGA Commissioner Mike Whan never replied to a Jan. 7 text message seeking comment on the issue, while U.S. Golf Association president J. Stuart Francis replied to an email saying, “On the topic you asked about, I am not in a position to comment on it.”

Isn't the game of golf bigger and better than Donald Trump? Isn't our nation more important than one powerful golf course owner? Isn't golf supposed to be about honor and ethics and decency? What in the world are these people so afraid of?