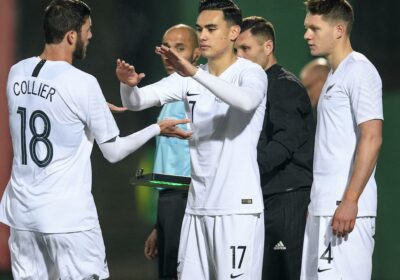 The All Whites could be no more.

New Zealand Football (NZF) are contemplating dropping the All Whites moniker for the men’s national team.

The potential change is part of a wider process NZF is going through to ensure they are up to the mark when it comes to cultural inclusivity.

It comes on the back of the heightened worldwide awareness around racism and racial inequality, and the name’s potentially racist connotations, and RNZ understands the national body began gauging feedback on the potential change more than six months ago.

NZF chief executive Andrew Pragnell declined an interview, with the organisation instead issuing a short statement.

“As with many other national bodies, New Zealand Football is on a journey around cultural inclusivity and respecting the principles of Te Tiriti o Waitangi.

“As part of our Delivery and Sustainability Project announced last year, we are in the process of working with stakeholders across the game, as well as people from outside football, looking at all areas of the organisation to make sure they are fit for purpose in 2021 and beyond.

“It is too early in the process to speak about any outcomes but this is an important piece of work as we strive to be the most inclusive sport in Aotearoa.”

Whatever happens, the history of the name means the potential change is likely to be polarising with New Zealand football fans, along with past and current players.

The All Whites name came about during the team’s qualifying run ahead of the 1982 World Cup in Spain.

The team had predominantly worn white shirts and socks with black shorts but after coming onto the pitch or their third qualifying match away to Taiwan in a full white playing kit, the moniker was coined and swiftly adopted.

That 1982 team, of course, famously went on to earn New Zealand a place at the football World Cup for the first time.

The name and full white kit are also closely associated with the team that qualified for the 2010 World Cup, where they earned plaudits around the world for going unbeaten in their three group matches.

Several major sports teams have changed their name in recent years due to their potentially racial connotations, most notably in the US.

American Football franchise Washington dropped the Redskins moniker, while the Major League Baseball side from Cleveland was no longer known as the Indians – both changes made because of the names’ ties to Native American culture.

In New Zealand, the Crusaders rugby team didn’t change their name but did change their logo in 2019 after questions were raised about the appropriateness of the name due to its reference to the religious wars between the Muslims and Christians in the Middle Ages.

The current situation with New Zealand Football was also not the first time they had considered dropping the All Whites name.

In 2009, former chief executive Michael Glading proposed the team’s alternative black strip should become their primary strip and the moniker should also be cast aside.

Glading pitched the idea prior to the All Whites successful qualification for the 2010 World Cup.

He told RNZ the idea was more about standing out from other nations with an all-black kit and creating a new history for the team, rather than any racists connotations the name had.

“At the time, I felt it would create a point of difference in the world of football. There were no international [football] teams playing in black.

“I realised it would mean throwing away the moniker of ‘All Whites’ but, nevertheless, I thought we should try and stand out from the crowd a little.

“Some of the players liked idea but unfortunately the whole board were dead against it, so it was turned down flat. In fact, some people thought I’d lost my marbles … they thought we’d be throwing away the history [of the name].

“In the end, it got scuppered so fast it never got much momentum.”