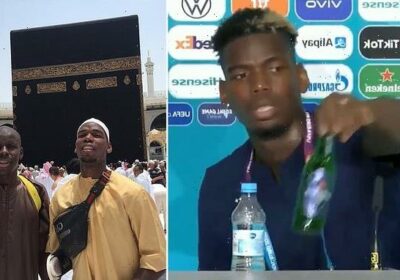 Paul Pogba is the latest footballer to be in mood to pander to sponsors after the Frenchman removed a bottle of Heineken placed in front of him at a Euro 2020 press conference.

Pogba, a devout Muslim, was seen moving the beer bottle away from his eyesight as he undertook media obligations following France’s opening game victory over Germany on Tuesday night.

For Muslims, alcohol is ‘haraam’ or forbidden, with the Manchester United star’s removal of the bottle likely to be due to his unwillingness to endorse the competition’s sponsor. 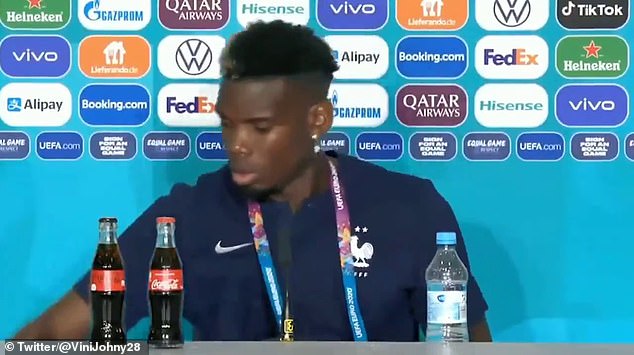 Pogba’s stance comes after Cristiano Ronaldo removed two bottles of Coca-Cola placed in front of him prior to Portugal’s game against Hungary.

The health-obsessed 36-year-old – who has previously revealed that it irritates him when his son drinks fizzy drinks – moved the two bottles away from his chair before shouting in Portuguese: ‘Drink water!’

He then brandished a water bottle and placed it in front of himself for the remainder of the interview, muttering ‘Coca-Cola’ with noticeable disdain.

Pogba, a devout Muslim, took to questions after France’s win over Germany on Tuesday night

Pogba became a Muslim in 2019 and has travelled to Mecca, Islam’s place of pilgrimage

Consumption of alcohol is forbidden (or known as ‘haraam’) among Muslims.

Muslims abstain from drinking alcohol because the Prophet Muhammad, whom Muslims believe the word of God was revealed in the Qur’an, spoke against it.

The Qur’an says that alcohol’s potential for sin was ‘far greater’ than its benefits.

Ronaldo, one of the greatest footballers to have ever played the game, is notoriously fastidious about his diet and exercise regime

According to the Manchester Evening News, Pogba became a Muslim in 2019, describing the decision as making him more ‘peaceful inside.’

‘It’s everything. That’s what makes me thankful for everything,’ Pogba told the Times via MEN of his decision to worship Islam.

‘It made me change, realise things in life. I guess, maybe, it makes me more peaceful inside.

‘It was a good change in my life because I wasn’t born a Muslim, even if my mum was. I just grew up like that, respect for everyone.

‘Islam is not the image that everyone sees – terrorism… What we hear in the media is really something else, it’s something beautiful.

‘You get to know it. Anybody can find that he feels connected with Islam. It came because I have a lot of friends who are Muslim. We always talk.

‘I was questioning myself in a lot of things, then I started doing my own research. I prayed once with my friends and I felt something different. I felt really good.’

It remains to be seen whether Heineken will respond to Pogba’s removal of their product from his post-match press conference. In response to Ronaldo’s move, Coca-Cola said that ‘everyone is entitled to their drink preferences’.

Pogba played a starring role in France’s win over Germany to kickstart their Euros campaign. The 28-year-old played an outstanding pass to help split open the German defence and lead to Mats Hummels’ own goal in the first half. 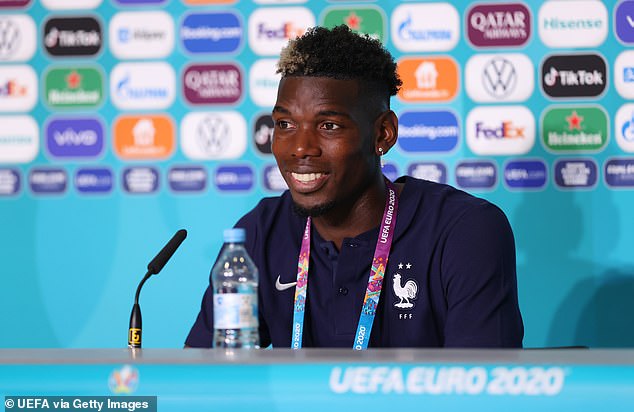