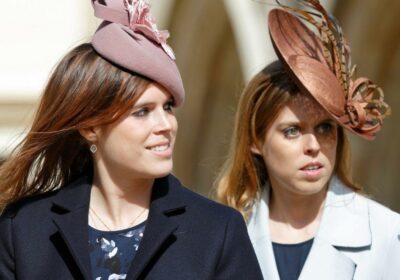 A lavish royal affair took place back on April 29, 2011, when Prince Wiliam and Catherine, Duchess of Cambridge tied the knot. The wedding was held at Westminster Abbey and included 1,900 guests.

Cameras caught many of those guests arriving, including William’s cousins Princess Eugenie and Princess Beatrice. At the time, the princesses were relatively unknown outside of the U.K. However, their names and photos were plastered on tabloids all over the world following the royal wedding because of their attire.

What Princess Beatrice and Princess Eugenie wore to the wedding

Fascinators are a staple in British fashion for formal affairs and the princesses, who were no strangers to rocking eye-catching headpieces to events, went all out for the royal wedding.

Eugenie wore a knee-length blue, aqua, and purple dress with a bright blue fascinator that had a dark purple flower and fluffy white feathers sticking out. Her sister, Beatrice, donned a light-colored knee-length ensemble with a matching, gravity-defying Philip Treacy fascinator. Their looks became some of the most talked-about from that day but not in the way they would have liked.

Prince Andrew and Sarah Ferguson‘s daughters were slammed for their fashion choices and the negativity affected the two women.

Why they both broke down and cried

In an interview with British Vogue, Eugenie admitted that she and her sister broke down crying at a Buckingham Palace garden party because of all the backlash they heard about their attire following the wedding.

“There was a horrible article that had been written about Beatrice and she got really upset,” Eugenie recalled. “We were just about to step out and she had a bit of a wobble and cried. I was looking after her. And then about an hour later, I had a wobble and started crying.”

Beatrice’s unique hat was later sold on eBay and the proceeds went to charities Unicef and Children in Crisis. “I’ve been amazed by the amount of attention the hat has attracted,” Beatrice said (per the BBC). “It’s a wonderful opportunity to raise as much money as possible for two fantastic charities.”

What a difference a decade makes

These days most royal fans know exactly who Princess Eugenie and Princess Beatrice are, and the ladies no longer end up on those “worst-dressed” lists. In fact, both of them have been praised for a number of their fashion choices in recent years including the gowns they chose for their own weddings.

In October 2018, when Eugenie wed Jack Brooksbank she wore a lovely dress designed by Peter Pilotto and Christopher De Vos which featured a wide-neck V shape with folded shoulders and a low back. Eugenie, who was diagnosed with severe scoliosis when she was a child, specifically asked the designers to make an open-back dress so the scar from her spinal surgery would be visible. The princess felt that it was important to show that scar because the operation to fix her spine’s misalignment changed her life.

Beatrice’s wedding to Edoardo Mapelli Mozzi in July 2020 was a more low-key affair as it took place during the coronavirus (COVID-19) pandemic and included just a few guests. Beatrice decided to wear one of Queen Elizabeth II’s vintage Norman Hartnell gowns. The beautiful dress was modified with puff sleeves. The princess also borrowed Queen Mary’s diamond fringe tiara, which her grandmother donned for own wedding to Prince Philip in 1947.