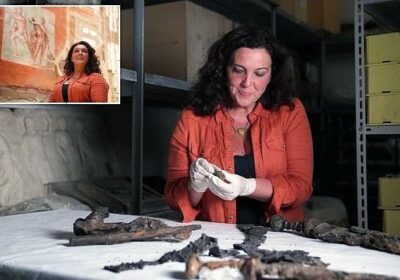 Pregnant mother in her 20s styled her hair ‘and put her little comb on’ before trying to flee the erupting Vesuvius nearly 2,000 years ago, historian tells new documentary exploring Pompeii

As catastrophe struck in Pompeii in 79AD, one pregnant mother-to-be still took the time to style her hair before trying to flee the erupting Vesuvius, according to a historian.

Bettany Hughes reveals the woman’s last steps before her death in Channel 5’s upcoming documentary Pompeii: Secrets Of The Dead, which airs on Thursday at 9pm.

The Italian city was annihilated when the Mount Vesuvius erupted, burying the cities of Pompeii, Oplontis, and Stabiae under ashes and rock fragments, and the city of Herculaneum under a mudflow.

Examining the woman’s remains in Pompeii for the documentary, Hughes is able to retrace the pregnant mother-to-be’s last living moments before she was engulfed in lava. 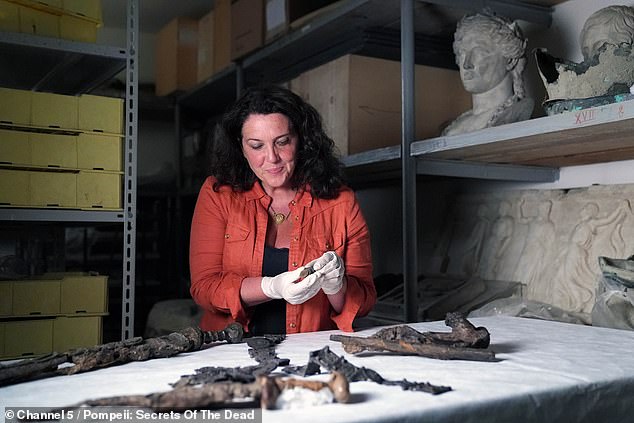 Historian Bettany Hughes, pictured, reveals on an upcoming Channel 5 documentary how one pregnant woman still took the time to style her hair before she fled Pompeii as it was being destroyed by lava during the 79AD Vesuvius eruption 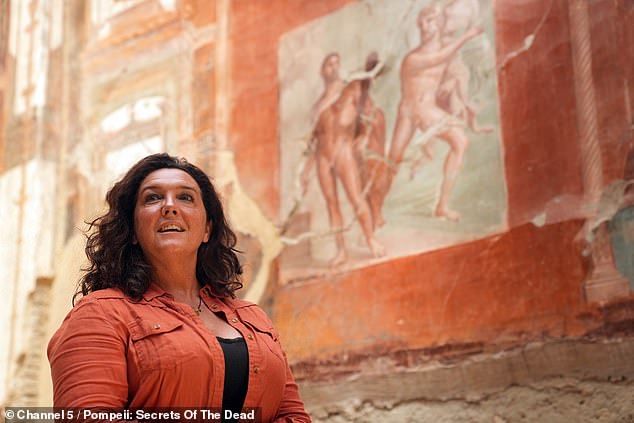 In Pompeii: Secrets Of The Dead, Hughes, pictured, reveals the woman was trying to escape Pompeii on a boat when the vessel overturned and the water evaporated

She explains on the programme how the woman died while trying to escape the lava taking over Pompeii, reported The Sunday Express.

‘[She] got down to the sea and was trying to get out on this boat but the boat overturned and the sea evaporated. She died in literally two breaths,’ Hughes says.

‘Even though everything was going pear shaped with this terrible explosion, she still had time to put her little hair comb on,’ she adds.

Hughes also looks at the remains of a roman guard who had been found not too far from the woman’s body. 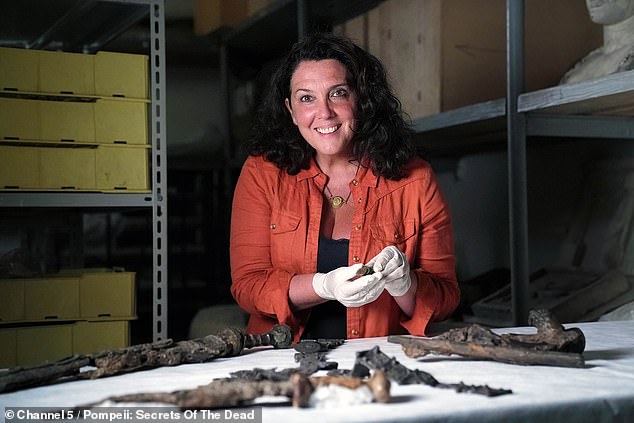 The historian reveals the woman was pregnant and had head lice, and that she died in ‘two breathes’

She says it was possible the guard and the woman had come together and tried to escape on the same boat, though she says she can not absolutely confirm it.

The historian says she was not able to tell what exactly had happened between the man and the woman and whether the guard had disembarked or had been thrown out of the boat.

However, she adds it was clear the man and the pregnant woman had suffered the same tragic fate.

Roman men and women in the ancient Italian town of Herculaneum – which was buried under volcanic ash and pumice by the eruption of Mount Vesuvius in AD 79 – had very different diets, a new study shows. 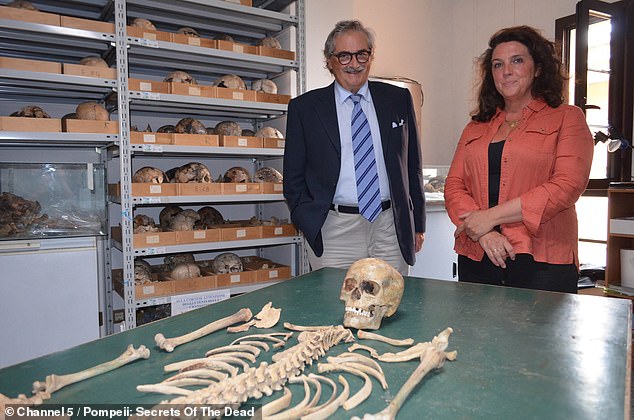 The historian examines the telling history of Pompeii’s remains in the show, pictured with another researcher

Researchers led by the University of York found that access to food in the ill-fated settlement ‘was differentiated according to gender’.

The experts used a new approach to analyse amino acids, the building blocks of proteins, from 17 adult skeletons – 11 men and six women – originally found in Herculaneum in the eruption’s aftermath.

By measuring the isotopes of carbon and nitrogen in the amino acids, the researchers reconstructed their diets in more detail than ever thought possible.

Men in Herculaneum benefitted from more fresh fish and seafood, which was something of a luxury item, as well as grains, while women appeared to eat more meat, eggs and dairy, as well as fruits and vegetables. 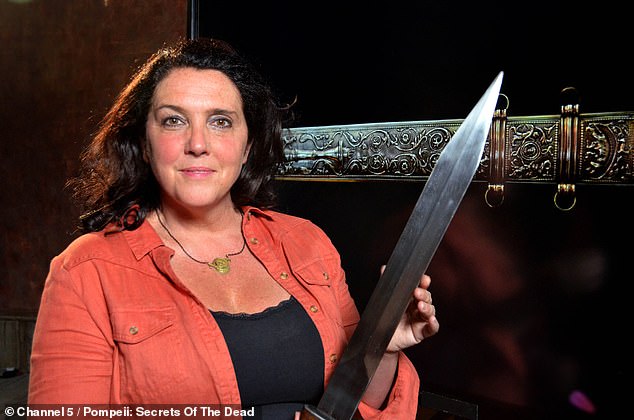 Herculaneum was destroyed – together with Pompeii, Torre Annunziata and Stabiae – by the Vesuvius eruption.

‘Our research builds on what we know that males had greater access to marine fish at Herculaneum and more broadly in Roman Italy,’ said study author Silvia Soncin from York’s Department of Archaeology.

‘Males were more likely to be directly engaged in fishing and maritime activities, they generally occupied more privileged positions in society, and were freed from slavery at an earlier age providing greater access to expensive commodities, such as fresh fish.’

Pompeii: Secrets Of The Dead, airs on Thursday at 9pm on Channel 5

How Pompeii and Herculaneum were wiped off the map by devastating eruption of Mount Vesuvius 2,000 years ago

Mount Vesuvius erupted in the year AD 79, burying the cities of Pompeii, Oplontis, and Stabiae under ashes and rock fragments, and the city of Herculaneum under a mudflow.

Mount Vesuvius, on the west coast of Italy, is the only active volcano in continental Europe and is thought to be one of the most dangerous volcanoes in the world.

Every single resident died instantly when the southern Italian town was hit by a 500°C pyroclastic hot surge.

Pyroclastic flows are a dense collection of hot gas and volcanic materials that flow down the side of an erupting volcano at high speed.

They are more dangerous than lava because they travel faster, at speeds of around 450mph (700 km/h), and at temperatures of 1,000°C.

An administrator and poet called Pliny the younger watched the disaster unfold from a distance.

Letters describing what he saw were found in the 16th century.

His writing suggests that the eruption caught the residents of Pompeii unaware.

Mount Vesuvius erupted in the year AD 79, burying the cities of Pompeii, Oplontis, and Stabiae under ashes and rock fragments, and the city of Herculaneum under a mudflow

He said that a column of smoke ‘like an umbrella pine’ rose from the volcano and made the towns around it as black as night.

People ran for their lives with torches, screaming and some wept as rain of ash and pumice fell for several hours.

While the eruption lasted for around 24 hours, the first pyroclastic surges began at midnight, causing the volcano’s column to collapse.

An avalanche of hot ash, rock and poisonous gas rushed down the side of the volcano at 124mph (199kph), burying victims and remnants of everyday life.

Hundreds of refugees sheltering in the vaulted arcades at the seaside in Herculaneum, clutching their jewelry and money, were killed instantly.

As people fled Pompeii or hid in their homes, their bodies were covered by blankets of the surge.

While Pliny did not estimate how many people died, the event was said to be ‘exceptional’ and the number of deaths is thought to exceed 10,000.

What have they found?

This event ended the life of the cities but at the same time preserved them until rediscovery by archaeologists nearly 1700 years later.

The excavation of Pompeii, the industrial hub of the region and Herculaneum, a small beach resort, has given unparalleled insight into Roman life.

Archaeologists are continually uncovering more from the ash-covered city.

In May archaeologists uncovered an alleyway of grand houses, with balconies left mostly intact and still in their original hues.

A plaster cast of a dog, from the House of Orpheus, Pompeii, AD 79. Around 30,000 people are believed to have died in the chaos, with bodies still being discovered to this day

Some of the balconies even had amphorae – the conical-shaped terra cotta vases that were used to hold wine and oil in ancient Roman times.

The discovery has been hailed as a ‘complete novelty’ – and the Italian Culture Ministry hopes they can be restored and opened to the public.

Upper stores have seldom been found among the ruins of the ancient town, which was destroyed by an eruption of Vesuvius volcano and buried under up to six meters of ash and volcanic rubble.

Around 30,000 people are believed to have died in the chaos, with bodies still being discovered to this day.