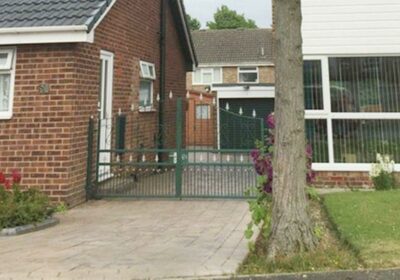 An angry neighbour has left Reddit users howling after partly destroying a tree in display of “British pettiness”.

Now, we all know how difficult it can be when you don’t get along with your neighbours.

Maybe they make too much noise, block your drive or damage your plants – it’s enough to drive you mad at times.

But, you don’t want to get in trouble by doing something which breaks the law or the rules on your land deeds

This means we sometimes find some petty solutions to our neighbour wars.

And, this person clearly had some beef with the people who live next door to him…

In a snap uploaded to the Casual UK forum of Reddit, a house sits on a road with a drive way and iron gate standing between it and the next house over.

On the boundary line there’s a tall tree.

However, on the side facing the other house every single branch has been chopped off from top to bottom.

It looks like someone’s taken a chainsaw to any branches hanging from the boundary line and into the neighbours air space. Poor tree…

The snap was captioned: “Some traditional British pettiness on display.”

And, 31,600 people have liked the display of nightmare neighbour behaviour.

Almost 1,000 of them commented their opinions too.

One person said: “Ha.. The wrought iron gate really sets it off nicely. Feel like I know the exact guy.”

Another noted: “Personally as I get older and have a nice house now, I’m trying consciously hard not to end up like this. I shouldn’t get worked up over things that don’t even matter that much.”

“I'm not likely to cut a tree in half, but pointlessly internally yelling ‘get off my lawn’, does sneak in on occasion,” joked a grumpy resident.

Another commented: “Don't f*** with trees is a good rule of thumb.”

One bloke summed it up and said: “I used to live next door to exactly this type. So glad I moved.”

And, it seems many Reddit users had stories of petty neighbours to add to the conversation.

One wrote: “Lived next door to one of these guys. He asked if he could cut down the ivy on the front of my house. I said no.

“After I sold the house he just went ahead and did it after the new owners completed but before the moved in.”

“I have an old woman where I live who will literally chase me down in my car if I've forgotten to pull my bin back from the kerb within 30 minutes of returning from work,” added a second.

Another wrote: “First week in our previous house and our next door neighbour caught the busybody who bordered the back of our garden climbing over the wall and cutting down a hazel that blocked the smallest part of his sea view, whilst we were both at work.”

Have you ever got caught up in a neighbour dispute? Tell us about it in the comments section…