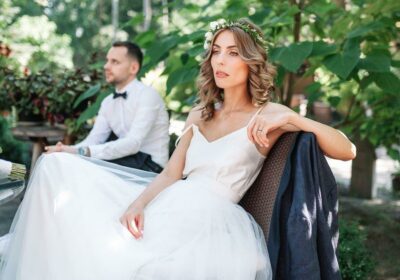 Weddings can be a stressful event to plan – from creating a guest list to actually deciding where everyone is going to sit, it can often require a lot of planning.

Especially when the big day is not cheap.

Thinking nothing more of his kind gesture, the brother was more than happy to pay out for her big day thanks to his large salary.

Until, his step-sister wanted him to pay for her wedding – and he declined.

Now the bloke fears he is in the wrong and has taken to Reddit for their advice.

He explained in the post: “So, my sister decided to get married earlier this year and I paid for the whole ceremony, it cost around £80,000 in total.”

“No issues as I can afford it and my sister was very happy, which is what matters in the end.”

“But now my step sister is getting married next month and she called me to say that I should help her with expenses for her wedding.”

He admitted: “I refused, why would I pay for her wedding? But then my mom called me and said that I shouldn't discriminate between my two sisters, like wtf? I only have one.”

The brother provided a little back story to his family history – and it is not exactly smooth sailing.

He said: “So my mom got divorced from my dad when I was 6 and my sister was 8. She didn't want anything to do with us, and she eventually got remarried to a guy who had a daughter 1 year younger than me.”

“And I have to admit she has been a good mother ever since, and we have a good relationship with our half sister also.”

Despite his mum disappearing for a good chunk of his life due to her other family, she continued pushing her demands.

“Mum says that since my step sister and her fiancée are not very well to do, I should help them", he revealed.

“I told her that just because I paid for my own sister's wedding it doesn't mean that I would pay for the wedding of the daughter of the guy she left us for.

“But she said that I am being petty. My sister and dad are on my side.”

Stunned at the demands of the mum and the step-sister, many people fled to the comments to defend his decision as the brother.

One person commented: “Your money, your call as to who gets it. Also, your stepsister coming to you and actually asking for the money is seriously ballsy and tacky.”

Another user added: “You met her when she was 18 years old. You were developing a relationship with them. Just because you are open to a relationship does not mean they are entitled to your money."

A third person noted: “For her to call you and tell you that YOU SHOULD pay for HER wedding shows a sense of entitlement to your hard earned money. She and her spouse should pay for the wedding, end of story.”

Let us know in the comments what you think of the brother’s decision of not paying!