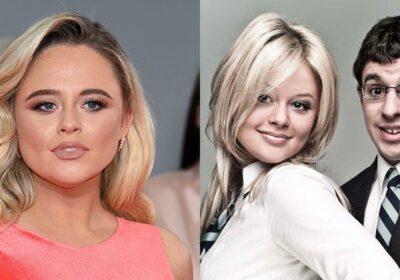 Blonde bombshell Emily Atack is easily one of UK TV’s best-loved faces. Having scored her breakout role in hit teen comedy The Inbetweeners, she reappeared on our screens in 2018 for I’m A Celebrity Get Me Out of Here! and has been keeping us entertained with her signature wit ever since.

Although most people know her as a blonde, the star has changed up her beauty look from time to time over the years. Below we take a look back at some of her signature looks from days gone by…

Emily first burst onto our screens in 2008 appearing in The Inbetweeners as Charlotte Hinchcliffe, also nicknamed “Charlotte Big Jugs” in the show. (A friendly reminder that the comedy followed a group of boys who were studying at sixth form.)

The star was a blonde when she rose to fame, and so it’s the shade that’s been thought of as her signature in the years that followed.

The big difference between this 2010 look and now is the eyebrows, which are considerably thinner than the fluffy arches she and most celebs sport today, and side parting, as Emily now prefers a centre parting. Her hair is also longer and an icier blonde than today.

You’d be forgiven for thinking that Emily has only ever had longer styles when it comes to her hair, but there have been occasions when she’s opted for shorter lengths too.

In early 2015 not only was she a brunette, but she also sported a shorter layered cut that’s giving us nineties Rachel Green vibes. The look is complete with pencilled-in brows, a 2010s staple.

Many celebs have dabbled in the world of ombré hair at some point, and Emily is no exception.

After going back to blonde the year before, her 2017 look was a graduated brunette-to-dark blonde style that fell just past her shoulders with a blunt finish.

Emily was still a blonde when she went into the I'm A Celeb jungle, capturing the nation’s hearts and making it all the way to the final, where she ultimately lost out on the crown to footballing legend Harry Redknapp.

Here she is pictured with beachy waves on her return to London, as well as gorgeous freckles from all that jungle sun.

Emily clearly fancied a change after being seen all over our screens with her blonde hair, as she then went back to her brunette look after her return from Australia – seen here with a gorgeous vintage-inspired style on the Pride of Britain Awards red carpet in 2019.

Today, Emily is firmly back on the hair colour she’s best known for, having returned to blonde in 2020 and seemingly sticking with it for now – although she can clearly pull off just about any hair colour under the sun.

Here she is at this year’s OK!-sponsored NTAs, pairing her vintage hairstyle and coral gown with pastel yellow nails for a fun and colourful ensemble.

Who knows what hair colour Emily will switch to in 2022!

For all the latest celebrity news including their hair and makeup secrets sign up to the OK! Daily Newsletter now