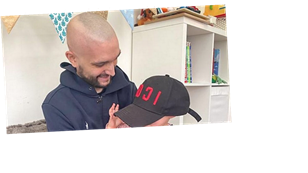 Tom Parker says one of the most difficult things to overcome mentally about his devastating cancer diagnosis was his baldness.

The Wanted star, 32, feels "silly" but it all hit home when he had to shave his head one evening.

Brave Tom has shared a lengthy Instagram post and says getting the clippers out was an emotionally-charged moment.

The singer shares children Aurelia, 15 months and newborn Bodhi with his wife Kelsey.

Tom bravely revealed that he broke down when his hair fell to the floor but now says he has come to terms with the fact that his appearance has changed.

Tom continues to battle the terminal diagnosis and on January 7 he shared the incredible news that an MRI scan revealed the tumour has shrunk significantly after gruelling treatment.

Now the dad has opened up about what it was like in the early days of his fight against the disease.

He posted: "Having been in the public eye since the age of 21 my appearance has always been important to me.

"I have had many different hairstyles from a Danny Zuko quiff and the crazy blonde stage my wife hated.

"When I started treatment my hair started to fall out, so after a morning at the hospital I came home and told @being_kelsey to shave my head."

He continued: "I remember this so vividly, I felt like part of me was being taken away as I saw the hair drop to the floor. There were tears.

"I wore hats for the first couple of months as I was embarrassed by my appearance. I know it sounds silly for a man to be so bothered by baldness when I was facing so much more but to me it felt like I was wearing a badge of baldness that shouted ' I HAVE CANCER'

"So here I am facing my fears and laying myself bare. I have accepted my baldness and i now wear this 'new do' with pride. It's a trophy of what I have overcome and what I have yet to beat."

Earlier this month, Tom shared his delight with fans after his brain tumour showed a significant reduction following treatment.

The singer praised the NHS as he posted: "SIGNIFICANT REDUCTION. These are the words I received today and I can’t stop saying them over and over again."

He shared a picture with his wife Kelsey and their two infants, explaining he was "responding well" to treatment.

He wrote: "I had an MRI scan on Tuesday and my results today were a significant reduction to the tumour and I am responding well to treatment. Everyday I’m keeping on the fight to shrink this b*****d!"