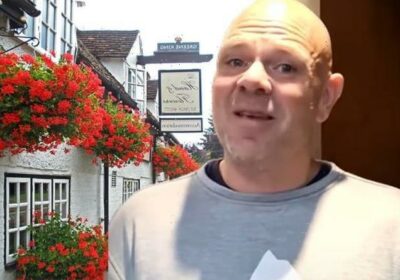 Alex Jones asks Tom Kerridge what he is making in June

Famous chef Tom Kerridge spoke exclusively to Express.co.uk about the importance of ingredients and why high quality food costs more. The food expert also shared details about his handy new range of canape recipes, which he created in partnership with Carr’s crackers in the hopes of taking some of the stress out of Christmas for those spending most of the day in the kitchen.

Tom, 48, is one of the UK’s most high-profile chefs, having starred in shows like The Great British Menu, MasterChef, and Saturday Kitchen alongside James Martin.

Tom is the proud owner of The Hand & Flowers and The Coach pubs, both of which have been awarded Michelin stars.

The famous food expert also opened up his first London restaurant at Corinthia Hotel in 2018.

When asked by Express.co.uk about his passionate defence of the price of food in his restaurant, the chef calmly explained why greater value should be given depending on the quality of ingredients.

“I think we’re all getting closer to understanding that the cost of food is relatable to the quality of ingredient,” he said.

“I try to explain it’s like a car, you know? They both do the same things, whether it’s a Bentley or whether it’s a mass-produced, factory-built Ford Fiesta, for example.

“You both sit in traffic on the M6, so you’ll both be a part of just travelling around London, but one of them has been handled and finished by artisan guys that have sewn the leather together in a beautiful factory.

“That’s got a personal touch about it, and the other one does the same thing, but it just isn’t the same product.”

Tom then moved on from the analogy to turn his attention to the types of food available on the market.

He explained: “The more that we can recognise the food isn’t the same, no matter what way you look at it…

“You know a piece of beef in the supermarket that has been sold very cheaply or steak served in a high street pub chain that’s around about six quid is very, very different to something you get in a steak restaurant. You know, they’re very different.”

Julia Bradbury supported by friends after she shares update [UPDATE]

“It’s about knowing how things are produced, and I think the more that we allow ourselves to become educated and take interest in it, rather than shouting about price…” he continued.

“It’s down to a lot of our own responsibility, but also down to us to be able to express the reasons why certain things taste and cost more.

“Food cost is related to the cost of ingredients, and then with the rising costs, that’s why those ingredients cost more.”

Aside from talking about the world of TV cookery, Tom is also hoping to share some of his wisdom with those looking for an easy way to cater for a lot of guests this Christmas.

A new survey from cracker-maker Carr’s reveals that almost two fifths of Brits put off entertaining due to the stress of cooking at Christmas, and that half feel greater pressure about hosting this festive season compared to previous years.

Tom explained that his new simple canape recipes, which cater to five different personality types, are designed to help “take the stress out of Christmas”, as they can be prepared in advance.

Of his Carr’s crackers creations Tom said: “They are quick and simple with hero ingredients matching people’s character traits, so that you can serve a range of delicious options that all your guests will love.”

The five personality types are: the achiever, the extrovert, the adventurer, the romantic and the sensualist – all of which have been paired with delectable flavour combinations.