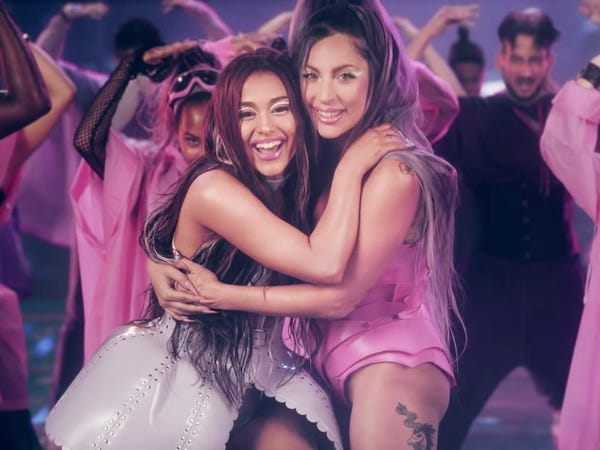 Even though MTV moved the 2020 VMAs from Brooklyn's Barclays Center to various audience-free sites in New York City to adhere to COVID-19 safety guidelines, they assured fans that the show would be live.

Lady Gaga, who made multiple appearances at the VMAs to accept awards and perform, also showed that she was watching the award show with her manager, Bobby Campbell, on her Instagram story minutes before the show aired.

The "Rain on Me" singer wasn't wearing the same outfit in the photo as she was at the show, proving that her appearances were likely pre-recorded.

Page Six reported that many parts of the show aren't happening in real-time, as MTV led viewers to believe.

A source told the outlet that many red carpet appearances, award presentations, and performances were pre-recorded days in advance.

MTV ensured that the talent adhered to COVID-19 safety guidelines, requiring the individuals and their teams to quarantined for three to four days before shooting red-carpet interviews and performances.

According to the source, individuals were tested once when they arrived and again before they performed.

The guidelines explain why The Weeknd, whose real name is Abel Tesfaye, was seen walking around with a bruised, bloody face on Thursday; He was in full makeup to shoot his performance at the Edge at Hudson Yards.

Other performers and presenters — such as CNCO, Maluma, and Bella Hadid — also reportedly pre-recorded their segments in New York City prior to the VMAs.

And not all of the artists made the trip to New York.

Performers based in Los Angeles were given the option to pre-record their appearances there if they didn't want to quarantine or had a team member test positive for COVID-19, Page Six reported.

"Performers in Los Angeles were all shot in-studio on a green screen," a source told the outlet. "Miley Cyrus, Ariana Grande, Lady Gaga, Doja Cat all shot theirs on a screen to make it look like they were in New York but they never came here."