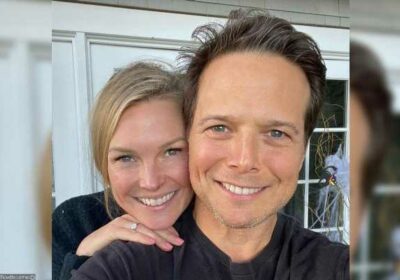 The ‘Party of Five’ alum admits he almost left the New York diner, where he was supposed to meet his now wife Kelley Limp for a blind date, but several people at the bar advised him to wait an hour.

AceShowbiz -Actor Scott Wolf would never have met his wife if it wasn’t for restaurant patrons who told him to wait an hour for his blind date.

The “Party of Five” star was about to leave the New York diner, where he was supposed to meet Kelley Limp, when she was a no-show. But some women at the bar advised him to give her a little extra time, suggesting an hour was a fair cut-off point.

“I kept asking people at the bar, ‘How long do you wait for a blind date?’ and they were like, ‘Kind of an hour, tops,’ ” he shared.

“She made it under the wire and 17 years later and three kids later… I was ready to leave and thankfully these people at the bar had a pretty long leash and they were like, ‘Give her an hour.’ “

Scott eventually married Kelley, a former star of MTV’s “The Real World: New Orleans”, in May 2004 after dating for two years. Their first child, a boy, was born in February 2009. They welcomed their second son in November 2012 and a daughter in 2014.

In 2018, he shared a relationship advice he got from his grandmother when he was still dating Kelley. “My nana told me, ‘Marry the person you want to see across the breakfast table for the rest of your life,’ ” the 53-year-old actor told Us Weekly. “And I did that. Because all the hot stuff and the cold stuff, it ebbs and flows and comes and goes. But we really like each other. I married the best person.”