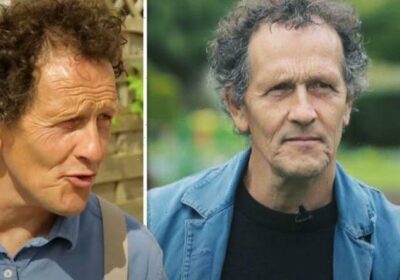 Gardeners’ World presenter Monty Don, 66, has taken to Twitter to detail a challenge he and his TV crew have been facing while attempting to film the hit gardening show over the past week. Since the coronavirus pandemic hit the horticulturalist has shared how the show has adapted to filming amid restrictions and social distancing measures, meaning that he hadn’t  missed an episode last year. However, Monty recently took to social media to reveal that he and his crew battled with unpredictable weather conditions this week, but despite the “dodgy showers” he had some “good stuff” lined up for the show.

In view of his 236,100 followers, the gardening star gave an update on the filming of the latest episodes, following the recent downpours across the UK.

The horticulturalist shared how he and his team had been forced to “dodge” the rainy weather while filming in his garden, Longmeadow, as he told his fans when to tune in for the show.

Monty wrote: “A lot of dodging showers over the last couple of days filming but lots of good stuff.

“It will be a nice programme (for Fri 6th)”, he clarified.

Earlier this month the star shared an update with fans of the BBC show after his absence prompted a reaction on social media.

In an announcement, the horticulturalist told fans he and a full team have been back filming for new episodes, following his absence from the show which saw him film abroad for a new series in Italy, Croatia and Greece.

However, at the start of July, Monty confirmed a full team were back with cautious social distancing measures in place.

During the coronavirus pandemic, he had been filming from his garden with no crew.

To make it work, cables were put into his garden, which connected up to cameras linked to screens in shipping containers on his drive.

In a tweet, he told fans: “Completed the first programme filmed back with full crew (albeit with social distancing).

“Under pandemic restrictions we did a job – hopefully well enough. But now we are back to doing what we love.”

Earlier in the year the star revealed that it takes a total of 10 days for each episode of the popular gardening show to be shot and produced before it airs on TV.

Given the recent downpours across the UK, the horticulturalist and his team will no doubt have had their work cut out for them when it comes to filming episodes for the show.

The gardening expert has also clarified where the BBC series is filmed after social media users were keen to find out more about the star’s stunning home and gardens.

After a Twitter user asked him if he “commuted”, Monty set the record straight on the location of his magnificent garden.

He wrote: “Gardeners’ World is filmed in my garden where I and my family have lived for the past 30 years.”

The favourite BBC series is filmed from his garden, Longmeadow, in Herefordshire, the West Midlands.

Monty and wife Sarah have lived in their home for 30 years. When they bought the property, it featured a two acre abandoned field and just one tree.

In his books and TV series, Monty reveals how he painstakingly spent the following years devoting himself to creating the garden of his dreams.

Gardeners’ World is on tonight on BBC Two at 7pm.