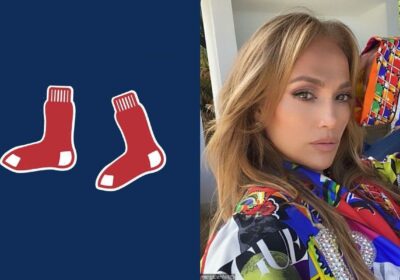 The Massachusetts baseball team, which has been a longtime rival of Alex’s former team the New York Yankees, is the favorite franchise of the ‘On the Floor’ singer’s other ex Ben Affleck.

AceShowbiz –Jennifer Lopez has received a special tribute from the Boston Red Sox following her split from Alex Rodriguez. More than a month after ending her engagement to the MLB star, the “Let’s Get Loud” hitmaker got a “miss you” message from the Massachusetts baseball team.

The message in question was shared on the official TikTok account of the Boston Red Sox on Tuesday, May 18. The clip included footage of the 51-year-old singer at a Red Sox game in July 2019 with Alex while he broadcasted for “Sunday Night Baseball“.

Another video saw her hanging out with the team’s mascot Wally the Green Monster. The dedication was added with a text that read, “To the girl on the Monster for Sunday Night Baseball in 2019. Come back soon. We miss you.”

The Boston Red Sox has been a longtime rival of Alex’s former team the New York Yankees. It is also the favorite franchise of Jennifer’s other ex-fiancee Ben Affleck, who has been spending time with her in the wake of her separation from Alex.

Jennifer and Ben have sparked romance rumors since late April after he reportedly made multiple day visits to her Bel-Air home. About the meetup, a source told Page Six, “Security picks him up at a nearby location and drops him off after spending a few hours at her house.”

Earlier this month, the “Shotgun Wedding” actress and the “Zack Snyder’s Justice League” star was photographed riding in a car together near a resort in Big Sky, Montana. Days later, the pair were caught on camera again while exiting a private plane in Los Angeles.

About Jennifer and Ben’s vacation, a source told PEOPLE, “She had a great time with Ben… She is happy with him and enjoys spending time with him.” A separate source, meanwhile, told the outlet, “[Jennifer] spent several days with Ben out of town. They have a strong connection. It’s all been quick and intense, but Jennifer is happy.”

Although the exes were reported to be just “friends”, the “On the Floor” songstress continued to spark romance rumors after she let out a cryptic post about love on Instagram Story. In the May 18 post, there were three cards featuring some words of affirmation with one reading, “Oh, the comfort, the inexpressible comfort of feeling safe with a person.”

The second card read, “Having neither to weigh thoughts nor measure words, but pouring them all out, just as they are, chaff and grain together, certain that a faithful hand will take and sift them. Keep what is worth keeping, and with a breath of kindness blow the rest away.” In the third, it was noted, “Where there is great love there are always miracles.”