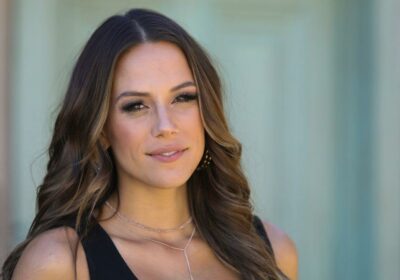 Jana Kramer is focusing on the positive amid her split from Mike Caussin. The One Tree Hill star took to Instagram on Saturday to share a sweet photo with her children, who add “light” to her life.

“Sunshine is good for everyone,” the singer wrote on Instagram alongside a shot of herself with her kids. “I gotta be honest 2 weeks ago the sun was the last thing I wanted to see…but through grieving you start to see the light…even if it’s a dim light it’s still something I’m gonna be grateful for.”

“But I’ll forever be grateful for these 2 and the forever light they add to my life,” she added.

A source told ET on April 21 that Kramer filed for divorce from her husband of six years after “he broke her trust again.”

“Please know that I still believe wholeheartedly in marriage, love, and rebuilding,” she wrote on social media at the time. “I just can’t fight any longer. It’s time to heal.”

In court docs filed in Williamson County, Tennessee, and obtained by ET, Kramer listed her date of separation as Tuesday, April 20. She also claimed that she is the “fit and proper person” to have custody over their two children, 5-year-old Jolie and 2-year-old Jace, and further requests that child support be set pursuant to the Tennessee Child Support Guidelines.

Kramer, who had a postnuptial agreement with Caussin, also requested for him to pay alimony and cover the cost of her legal fees. ET has reached out to Kramer’s rep for comment.

Caussin had previously admitted to cheating on Kramer in the past. The pair split in August 2016 amid reports of infidelity, after which Caussin entered rehab for sex addiction. He and Kramer ended up reconciling soon after.

See more on the pair in the video below.