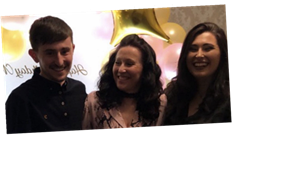 Sophie Sandiford's fans have said her mum Julie looks "more like her sister" after she shared a snap of herself with her mum.

The Gogglebox star, who recently united with Izzi and Ellie to celebrate Shirley Griffiths' birthday, took to her Instagram feed to post a sweet photo with her family to celebrate her mum's birthday.

The snap shows Sophie, 24, wearing a black ensemble with a gorgeous face of make up featuring a dark lipstick as she stands next to her mum, who dons a pink shirt.

Julie teamed the look with a pair of black trousers and styled her mane down into waves as she smiled at her son Pete, 26.

"Happy birthday to the best mum ever," Sophie wrote in the caption. "we’re all so lucky to have you and so grateful for everything you do for us! Have a brilliant day! Love you always @juliejohnson31," [sic] alongside a pink heart emoji.

While a fourth added: "Wow she looks lovely could be your sis Sophie. Happy birthday," [sic] with a birthday cake emoji, two clapping hands emojis and a red heart emoji.

It comes as Sophie recently revealed she's got herself a new job after Debenhams went into liquidation and was forced to close all its stores across the UK.

Sophie revealed on Friday 12 March’s show that she is training to become a florist. As viewers were taken their Blackpool home, Sophie’s brother Pete, who recently got engaged, could be heard saying: “I wondered what that was in the kitchen.”

To which Sophie explained: “It’s my new floristry kit for my floristry course. I’ll get my gloves on!” As she tried on her new pink and white gloves, Pete said: “They’re golfing gloves.”

“They’re not golfing gloves, they’re [for] floristry,” Sophie explained as she held out her hand for Pete to inspect the new gear.

Pete asked: “Why have you got gloves?” to which Sophie explained: “Because, when it’s cold conditioning the flowers, when you’re pulling the leaves off, you need a bit of protection on the hands.”

Sophie’s sibling couldn’t help but make a cheeky joke as he then quipped: “Well, if you’re dealing with roses you’re used to dealing with little p***ks, aren’t you?”