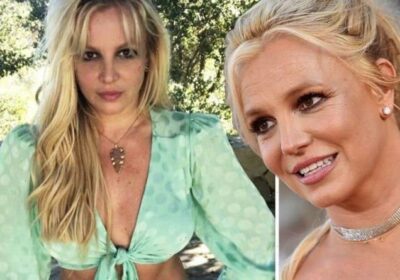 Britney Spears has taken to Instagram to post a series of candid snaps in celebration of her new-found freedom after her 13 year conservatorship came to an end yesterday. The award-winning singer was not present when Judge Brenda Penny announced that her conservatorship had finally been overturned in the Stanley Mosk Courthouse in Los Angeles, but branded it “the best day ever” following the ruling.

I think I’m gonna cry the rest of the day!

In view of her 36.1 million followers, the star celebrated the victory.

Posing in a lime green tie shirt and pair of white hot pants, the star shared a series of snaps of herself in the outfit.

She also shared a clip of her fans celebrating the end of her conservatorship at a ‘Freedom Party’ outside of the Los Angeles court.

Britney wrote: “Good God I love my fans so much it’s crazy !!!

Yesterday, Judge Penny ruled that Britney’s conservatorship should come to an end after she was placed in the care of her father Jamie Spears in 2008.

The legal agreement saw her father take control of her finances and personal life, but has finally been overturned after lawyer Mathew Rosengart asked the judge to end the conservatorship without a medical evaluation.

Speaking at the 30-minute hearing, the Judge told the court: “Effective today, the conservatorship of the person and the estate of Britney Jean Spears is hereby terminated.”

Following the ruling, Britney is now in charge of her own financial, medical and personal decisions for the first time in 13 years.

Fans gathered outside of the Los Angeles courtroom yesterday to celebrate the ruling after the singer was freed.

Back in September Britney’s father was suspended from her conservatorship after 13 years of acting as her legal guardian.

Judge Penny ruled that the star’s father will no longer have control over Britney’s estate, coming into effect immediately.

Commenting on the move, the Judge said: “I believe that the suspension is in the best interests of the conservatee. The current situation is untenable.”

Britney spoke out against her father in previous court hearings in June and July, claiming she had been medicated against her will and denied the right to have children.

The star’s lawyer, Mathew Rosengart, has also called for an investigation into the conduct of those who first administered the conservatorship in 2008.

The court-ordered arrangement was introduced after the award-winning singer was said to have suffered from a mental breakdown.

Commenting on the ruling at the time, a statement released by Mr Spears’ attorney maintained that he had tried to act in the pop star’s “best interests” over the course of the 13-year conservatorship, before branding the court’s decision to suspend him “wrong”.