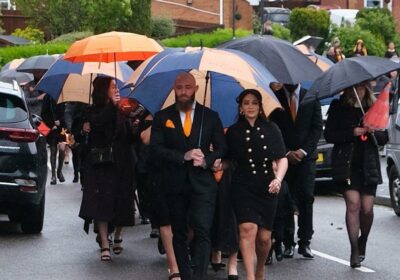 Ashley Cain and girlfriend Safiyya Vorajee have been joined by hundreds of people in their town of Nuneaton to pay their respects to their daughter Azaylia.

The 30 year old and his partner Safiyya, 33, tragically lost their baby girl in late April following a battle with leukaemia. The pair had raised £1.6 million to for a treatment in Singapore before being hit with the news that the disease had spread to her brain, leading them to enjoy their last days together at home.

The pair announced her funeral details in mid-May, explaining the immediate family would attend a private ceremony but inviting the public to take part in the cortege and make the day a celebration of her life.

The funeral started at 10am on Friday 21 May, with rows of orange balloons covering the fence at builders' merchant Jewson in Heath End Row before crowds gathered on Croft Road for the start of the procession.

It wasn't long before over a 100 people lined the streets, with some holding onto orange balloons in honour of Ashley and Safiyya's "lion" daughter Azaylia.

Others wore T-shirts with Azaylia's face printed on them while some carried bunches of orange flowers and lion balloons.

At 10:20am, a horse drawn carriage carrying Azaylia made it's way down the street for her "final journey" as her mum Safiyya walked close behind.

A funeral car was also seen adorned with lots of stuffed toy animals, including lions and teddy bears, while the horses were decorated with orange feathers on their heads.

The crowd broke out into an applause and cheered their phrase "let's go champ" as the carriage went past. The family, dressed in black, then got into a series of Jaguar XJ funeral cars.

The cortege came to an end at 11:00 as the family arrived at a church in town where the family service will take place.

Yesterday, Safiyya took to her Instagram feed to thank all those who had a helping hand in decorating the streets with balloons as she said: "Guys I've just come out and literally drove through Nuneaton and whoever's took the time to do all the ribbons and make it look all beautiful for Azaylia I just wanted to say thank you so much for your time and effort for doing that today.

"That was so beautiful to see as I was just driving around."

She later shared footage of her nails, which she got done in tribute of her late daughter. One nail had several glitter pieces on it with a drawing of angel wings between an orange light. Over this, she wrote: "My Azaylia day" as Mariah Carey and Whitney Houston's When You Believe played in the background.

Her index finger and little finger's nails showed orange jewels while her middle finger had a snap of Azaylia on it and ring finger had a photo of Simba from The Lion King.

"My tribute nails to look at you all day My heart is aching so hard I'm so nervous for today but I promise I will do you proud baby," she wrote over this with a crying emoji and an orange heart emoji.

Her other hand mirrored the first set of nails, with her middle finger showing a snap of herself kissing Safiyya as she holds her up in the air.

Safiyya wrote: "My guardian Angel," with an angel emoji over this as she added: "My daughter Azaylia diamond cain Mummy hold you on my heart forever #letsgochamp".