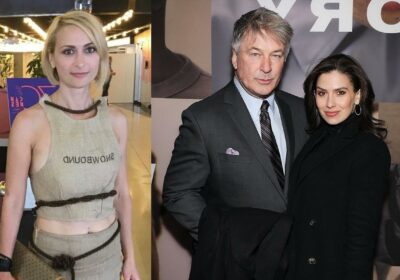 Hilaria Baldwin sends prayers and condolences to Halyna Hutchins and family following a deadly accident involving her actor husband on the set of western movie.

The tragedy happened just outside Santa Fe, New Mexico on Thursday (21Oct21) on the set of Alec’s western movie “Rust” after a prop gun that had been declared safe misfired, fatally wounding Hutchins and also injuring director Joel Souza.

On Monday (25Oct21), Alec’s wife of nine years shared her condolences to Halyna’s family on Instagram with a simple black and white graphic.

It reads, “My heart is with Halyna. Her husband. Her son. Their family and loved ones. And my Alec. It’s said, ‘there are no words’ because it’s impossible to express the shock and heartache of such a tragic accident. Heartbreak. Loss. Support.”

Alec’s daughter Ireland, his brother Stephen, and his niece, Stephen’s daughter Hailey Bieber, have also shared their support for the “30 Rock” star and Hutchins’ family.

On Friday, the actor shared his “shock and sadness,” writing on Twitter, “There are no words to convey my shock and sadness regarding the tragic accident that took the life of Halyna Hutchins, a wife, mother and deeply admired colleague of ours. I’m fully cooperating with the police investigation to address how this tragedy occurred and I am in touch with her husband, offering my support to him and his family. My heart is broken for her husband, their son, and all who knew and loved Halyna.”

According to People, Baldwin is “absolutely devastated” by the shooting and has cancelled all upcoming projects to be with his family.